In the summer, we hosted the first ever MN Hub team meeting and aided FIRST Senior Mentor Renee Becker in presenting the Hub concept. During the fall, because of our team’s phenomenal performance in Beta Testing the previous season, the Robettes were one of nine teams selected to Alpha Test the 2015 FRC Control System. In addition, our team took on many mentorship roles: we brought FLL back to Visitation, forming the Blazer-Bots, and mentored a rookie, all-female team from Australia. Our team participated in two qualifying regionals. At the Lake Superior Regional the team advanced to the quarterfinals, won the quality award, and Madeleine L. was named a Dean’s List Finalist. At the Minnesota North Star Regional, our team won the Judges’ Award along with the regional, allowing them to advance for the second time in team history to the World Championships! At the World Championship, Madeleine L. was named a Dean’s List Award Winner. She was the first student from Minnesota to earn this award, and only one of ten to receive this prestigious award. 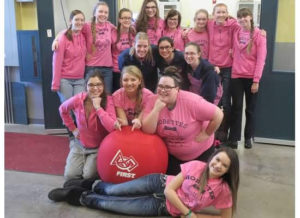 Celebrates outstanding student leaders whose passion for and effectiveness at attaining FIRST ideals is exemplary.

Celebrates the Alliance that wins the competition.

During the course of the competition, the judging panel may decide a team’s unique efforts, performance, or dynamics merit recognition.

Celebrates outstanding student leaders whose passion for and effectiveness at attaining FIRST ideals is exemplary.