We began building a robot out of a garage in 2006 with 18 student members and 8 expert mentors from Boston Scientific. Our team was formed in December, and while attending our first week 0 event, we were the only rookie team with a functional robot. At the FRC regional competition in St. Louis, MO, we won the Rookie Inspiration Award and the Highest Seeded Rookie Award. 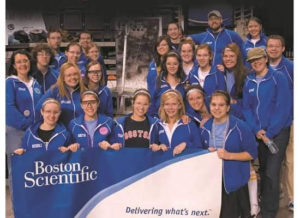 Celebrates the highest-seeded rookie team at the conclusion of the qualifying rounds.

Celebrates a rookie team’s outstanding success in advancing respect and appreciation for engineering and engineers, both within their school, as well as in their community.